Oh no, don’t do anything reckless now….

Say no! Seriously don’t listen to her. Iri from what I’ve seen of your character you can’t fight and the other women didn’t stand up much to him last time so you won’t help at all, you can’t help out all, just get out of there, okay?

Mmmmm, what do you mean by that Iri? I’m not sure if I like that line of dialogue. She doesn’t…know that Sniper guy is cheating on her, right?

I blinked, what happened? Thank god! But at the same time how?!

It might, because he thinks its his fault that you were able to shoot him. Please don’t let this battle leave Lancer’s Master alive, please take him out!

What are you doing? Why are you not even waiting to see if he gets up again? There is no way he’d go down that easily, are you an idiot? I also didn’t see any blood…

Iri don’t do anything stupid. Also I have no sympathy for you here, you’re stupidity got you into this situation. 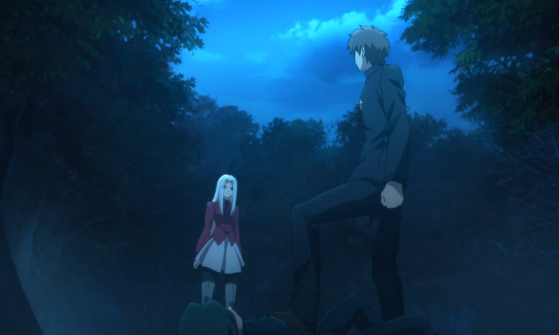 Oh, did I underestimate you Iri? Is that some kind of magic whip? However despite how cool it looks I’m still uneasy about this. Okay, what the hell is that? It looks amazing though! Though I do wonder if this is something she can do because she is a artificial master and if Sniper guy can do this as well, couldn’t Kirei also do something like this as those guys seemed to be quite similar?

That is a amazing ability! It reminds me a lot of the main character death parade ability (Can’t remember his name right now) 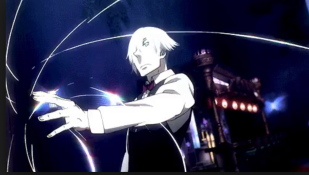 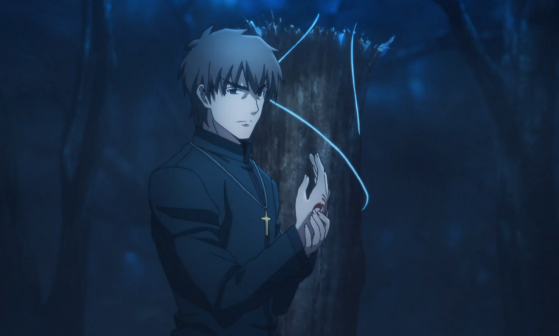 Oh, thats where the uneasy feeling came from! Thank you for letting me know show! Also I get magic and all but you were completely tied up, shouldn’t you be to tightly tied to that tree to even move or bring it down? I’d love to know what kind of magic that was, though I assuming some sort of strength enhancing magic or maybe elemental to bring the tree down.

Mind explaining to me why only now you told Lancer this, Saber? That might have been, you know, good information to give him as soon as he said he’d fight by your side! 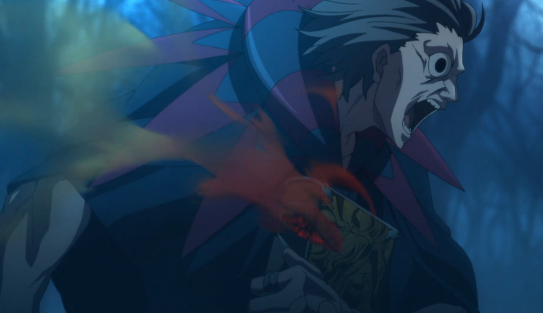 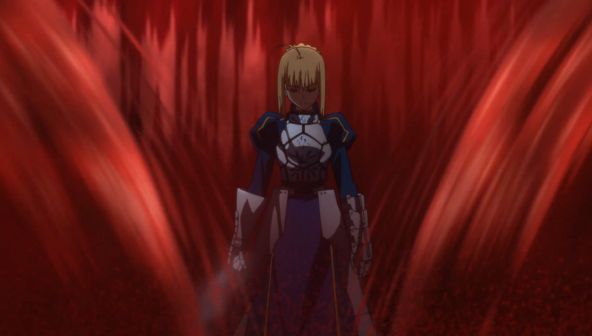 YES! And that is a brilliant but at the same time horrifying shot!

Just kill him already! Don’t let him talk, go in for the kill!

Well you’re not looking to good. I assume that if you are killed Lancer will go back to where he came from, so try not to kill him when Lancer is doing something important sniper guy.

Once Again another stupid decision from a character in this show. You were shot, wouldn’t it be the smartest choice to escape and heal, though hopefully this reckless action will get him killed. Also how on earth was this dude able to become a teacher. He’s sounding pretty insane at the moment.

Lancer seems troubled by something, I wonder if his master has been killed or if he can somehow now feel that his master is in trouble and what the hell?! No! He got away? Dam it! How long do I have to wait until someone kills him! Also please don’t let this be Lancer’s last fight! Do you have any idea how badass you look Lancer! Half of me loves this because it means you’re still in the game, the other half of me hates this because I seriously hate Lancer’s master.

Kirei let your hands go of her! I swear if you injure her severely or try and kill her for real, I will put you on my shit list! I had no idea what to think of your character but it will be going to the dislike category or even hate category if you keep going!

Hold on!? I know there was a possibility of her dying or getting severely injured but not yet! Right?

I don’t care about the sniper woman and for all I know she could be dead but they wouldn’t kill Iri, one of the main character’s this harshly right? If she were really dead I believe it would be a lot more dramatic than this…right? Well either way congrats show for making me incredibly unsure. Ha! Knew she was still alive! Well, okay I didn’t but I that “death” didn’t convince me so yay for being half right I guess? You go Saber, save her you shining knight in armour! 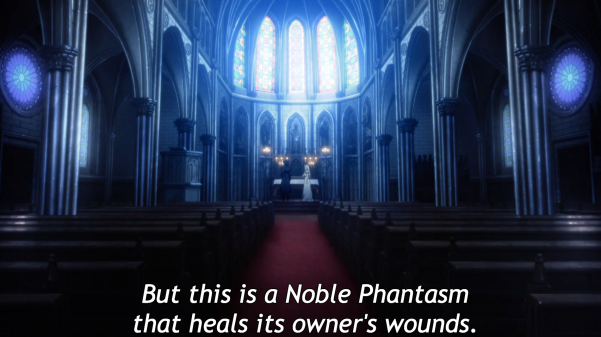 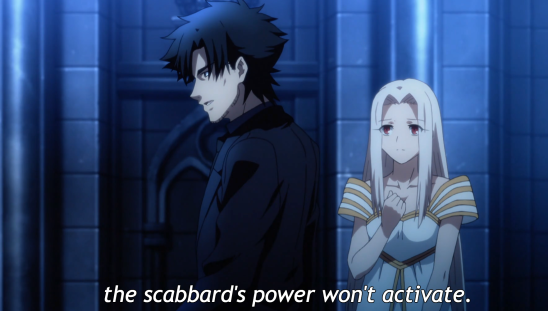 -MY GOD. I love you and Saber so much! 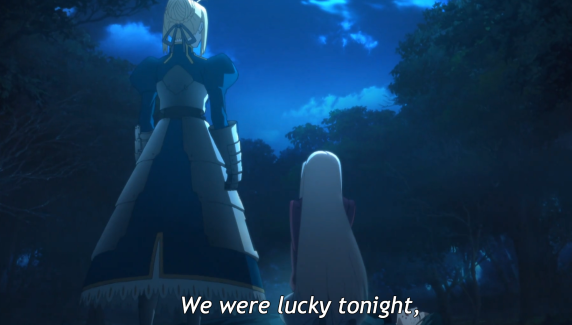 Couldn’t have said that any better! Especially Sniper girl despite her stupidity, like what? He could have killed you so many times, does she have a magic clover stuck to her outfit somewhere? 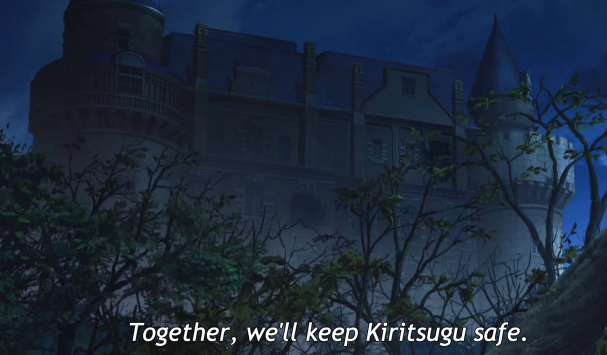 Aaargh, again I don’t like that line, it makes me believe that Iri might know about the cheating or she could be incredible innocent. I’m hoping for the latter.

Iri and Saber are amazing!