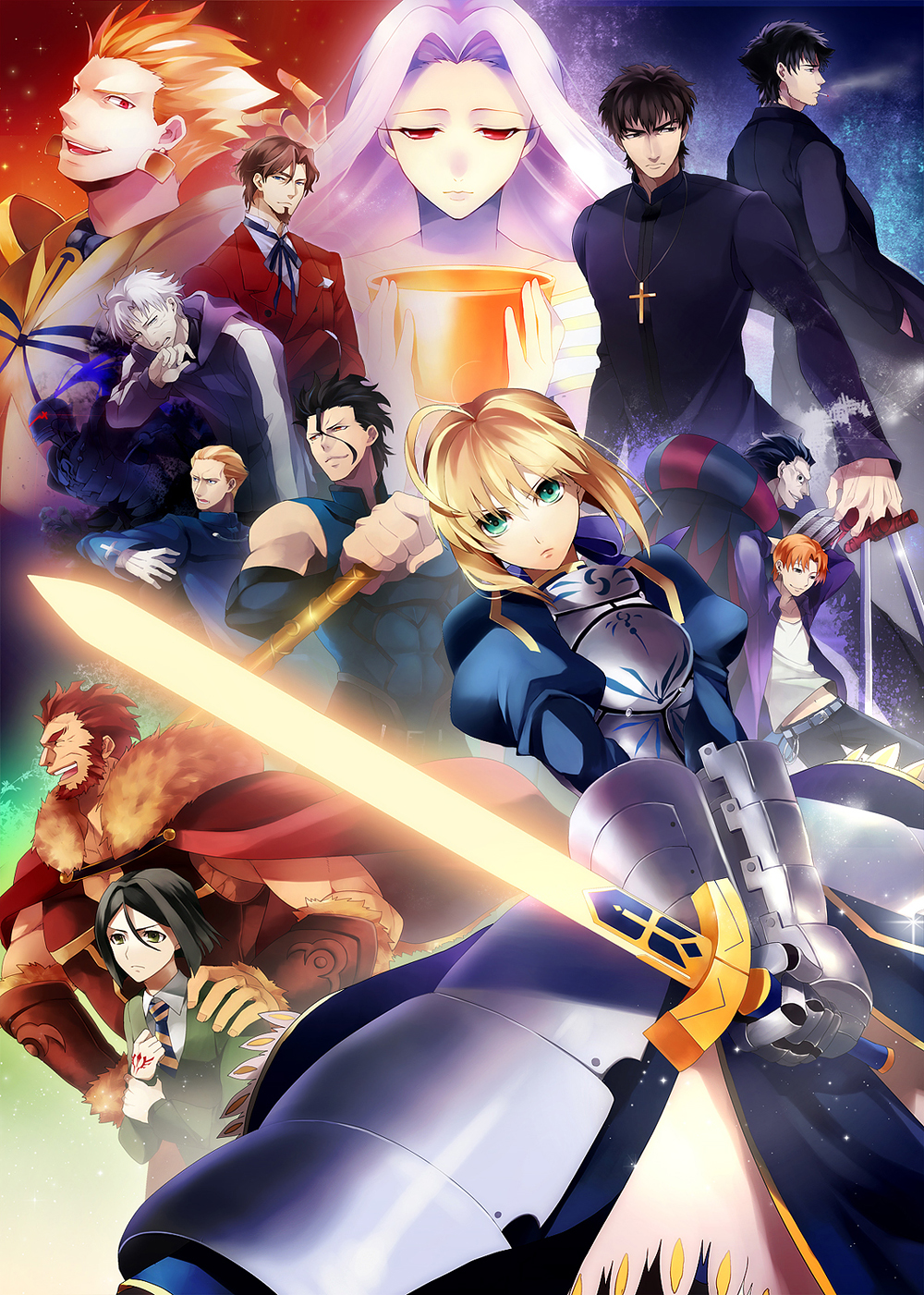 Welcome back! I hope you enjoyed my first episode, now on to the next one! I will also tag these with Fate/ZeroPC so you should be able to find them. Can’t wait to get started! 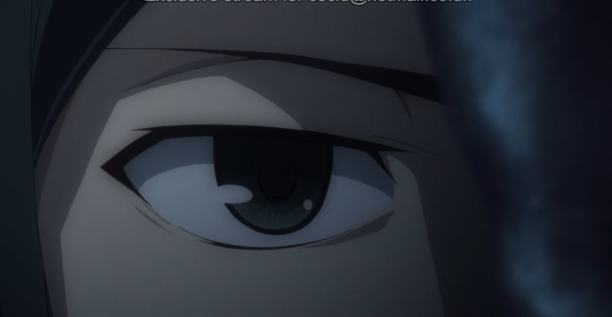 A mysterious dark atmosphere and and eye, well thats one way to start of an episode. Isn’t that the kid? Well, young adult, whatever his age. Why would he be hiding? 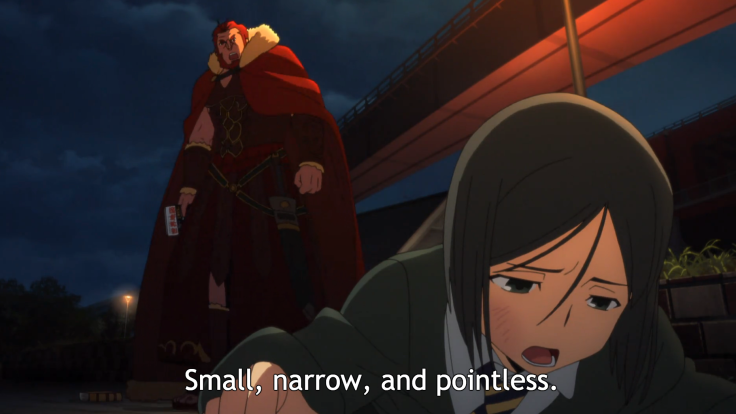 Well they don’t get along, as soon as I saw him I had a feeling they wouldn’t. I wonder why he is his servant, they just seem so different from each other? I guess they don’t have compatible personality’s unless one of them has a secret side and they have something similar with each other which would be interesting to see. Also why saddle the kid with someone who wants to rule the world, lol. Well I rather like the dream though he is right about him having to toughen up a bit, especially if he wants to get the holy grail. 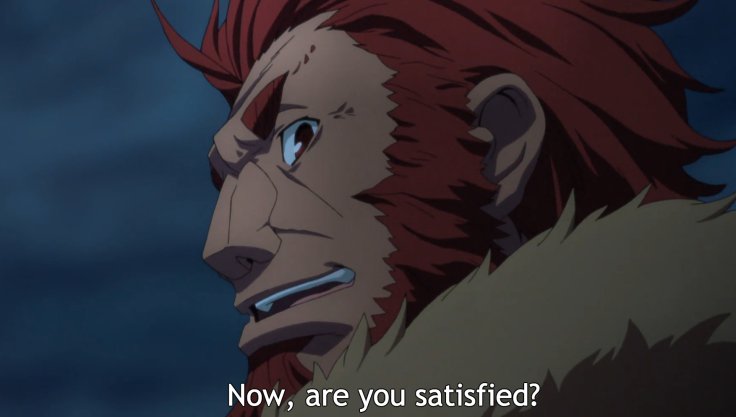 Hell yes I am satisfied! That was amazing! Wait so that was a gift from Zeus? Gods like that exist in this anime? Or are the mages able to bring myth to “reality” ? Its probably best you don’t anger him kid! The three commands was also useful info, I’m glad to know that the masters don’t have absolute control over them and they’re they are there own people. Though I do believe that these two will form a very close bond over time despite not liking each other at first. 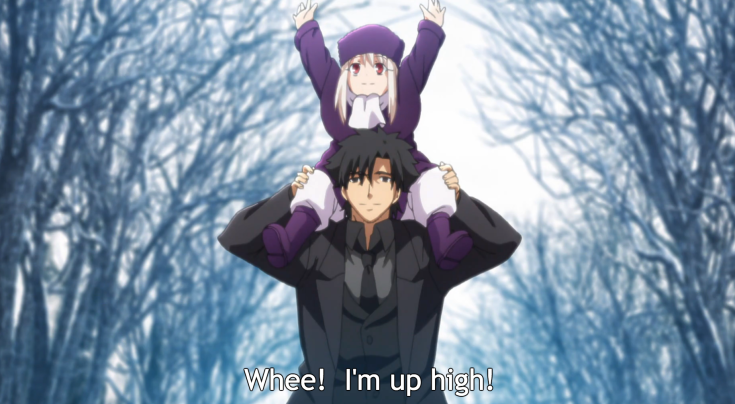 This is so cute! I am assuming because of her looks she is his and Iri’s daughter? I love how he is in all black but she stands out with her purple clothes in the woods. It also makes me feel sad because of how innocent she is and what’ll happen when she finds out her father does, though I am really happy he is spending quality time with his daughter. A lot more happy and navie compared to Rin but I think I’m falling in love them both. Oh wow! What a reveal! I did think for a couple of seconds that they had gotten the wrong servant and not thinking about my thoughts last episodes about Arthur being a women. Though does that mean Arthur was a made up name to keep people from knowing she is a women? Or if Arthur is still her true name, why is Iri calling her Saber? Unless maybe they have their real names from that era and their servant names? Maybe?

Now this is an odd pair, I wonder who the serial killer guy is, a very interesting character, the both of them. Though I do wonder how the summoning got mistaking for summoning demons, unless this servant is actually a demon but I think he/it said they were a caster? Whatever that means. Last episode I remember hearing that everyone who is chosen has a reason to seek out the Holy Grail, I wonder what the serial killers reason will be and he like knows nothing about it. At first I thought it was funny that this Servant was so different but the way he is talking to the kid and telling him to walk out the door is giving me the creeps…. 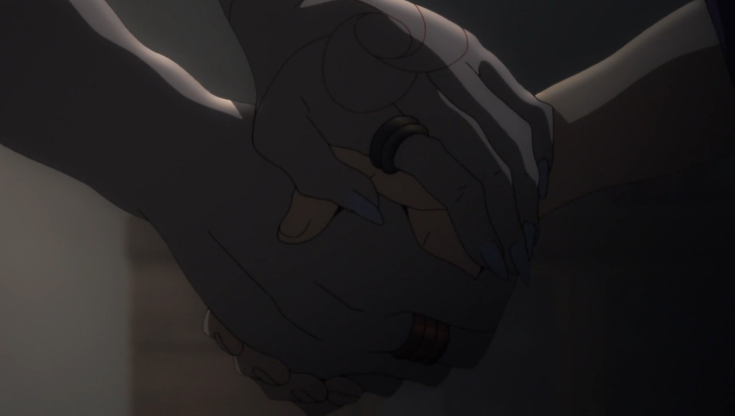 I am honestly so interested in this partnership and also creeped out at the same time. I almost smiled when the servant was so happy that his master understood him, whats wrong with me, rooting for basically serial killers and possibly a demon, haha.

Why do you need a new name? I want to know you’re name from the era you’ve come from! No fair! Though is that the reason why the servant that was Arthur is now called Saber? Do they change their names to suit this era more? Why….. Though I swear if his/its real name is Mordred, Arthur/Saber better nope out of there fast if she meets it/him, which I assume she will at some point. I’m still calling them an it until until I know for sure the serial killer didn’t actually summon a demon. I still don’t understand this, how can the assassin (I believe this is the assassin) Wasn’t he there before? I don’t think he was summoned around the same time as the rest, I’m confused though the music is great and I wonder who he is trying to assassinate, do I know them or not? 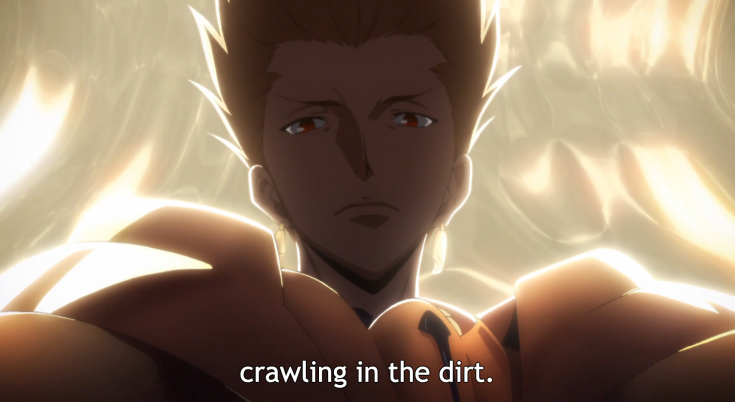 I have so many questions! No it can’t be over! Wow I feel like this went by in a much shorter time than the other one. I thought he was trying to someone, not still a jewel? Is he dead? Is the assassin really dead? Who is that knight in shining armour guy? I mean I know he must be a servant but which one and who is his master? So many questions so little answers! Can’t wait for more!

Is the Assassin dead? I doubt it but I do really want to see what happens when a Servant dies and we weren’t exactly attached to him anyway apart from knowing his sneak skills are epic.